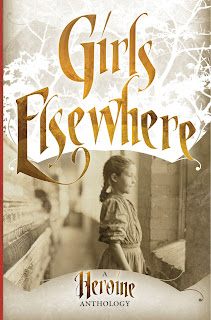 I just ordered the proof for Girls Elsewhere from the printer. It should include three character sheets by Julio Matos that are not in the PDF. If everything goes as planned, I should have both books for sale at GenCon. The Indie Press Revolution booth should have them, too.

Observations of the Fox Reviews Heroine

Michael reviewed Heroine back in May, and I noticed this morning that I failed to link to the review on this blog. You can find his review here, at Observations of the Fox. He says some good things about the book, which I value even more knowing that he isn't a fanboy for story games in general.
Posted by Unknown at 7:12 AM No comments:

Andy at Ludicrus Gaming has posted a thoughtful review of Heroine. It's clear that he spent time looking carefully at the game. Thanks, Andy.

It's my understanding that he will review Girls Elsewhere in a couple weeks.
Posted by Unknown at 7:04 AM No comments:

Hang around me long enough, and you will hear me complimenting Levi Kornelsen. In particular, I've mentioned before how much I like his Soap Opera hack. This plug-in motivates players to add melodrama into their game in order to re-fuel in-game currency.

Here is a way to use this hack in your Heroine game. These rules give the Companions an alternate way to gain Drama Points
The Companion move Get In Trouble is replaced with Gain a Relationship. See the hack for description of this move. A Companion who gains a relationship automatically gains 3 DP. She does not need to roll 2d6. When you gain a relationship, you add drama and distraction to the story, so the Heroine has more to think about than simply accomplishing her goal and defeating Challenges.
The Companion move Remember a Way Out is replaced with Escalate a Relationship. This move costs 2 DP. You can escalate relationships as often as you have points to do so. When you escalate, you take a relationship to the next level, and this decreases or distracts from the negative results of the Challenge at the end of this chapter.

If you give these alternate rules a try, or if you have any questions, email me at gingergoatpress@gmail.com or reach out to me on Google
Posted by Unknown at 1:17 PM No comments:

Do you have a game that's in the early stages of design? Like me, do you have a project that is something more than an annotated elevator pitch and something less than a playtest-ready game? If so, consider doing a Draft Swap.
A Draft Swap is an agreement between two game designers to spend a fixed amount of time working on each other's game-in-development. No money changes hands. No contracts are required. The two designers simply agree on a minimum amount of time to spend developing the other person's game and a deadline for completing the Draft Swap.
Gabe, a first time author with a lot of board game experience, offers to Draft Swap his rules light shopping simulator, Flea Swap Spree. Sasha, an experienced game designer, agrees. She hopes Gabe might add some sort of board-gaming element to Maple Autumn, her cooperative story game about leaves falling from a tree. Gabe and Sasha agree to spend at least one hour writing additional rules and designing additional elements for each other's games. They set a deadline of two weeks.
There are three additional rules for a Draft Swap:
1. If you publish or otherwise release your game after it has been Draft Swapped, you must credit the other game designer as collaborator, editor, developer, or some equivalent title.
2. You should strive to do three things for the other person's game. You should add at least one design element that you think it is missing. You should try to add to whatever fun elements are already there. You should make the game easier to playtest, which usually means clarifying the existing rules.
3. You should not ask the original designer for help. You must work on the Draft Swap alone. (If you don't understand something about the original designer's notes, ask it on the first day of the Draft Swap.)
Posted by Unknown at 11:15 AM No comments:

Yesterday I played Heroine with Jason from Rolling Intentions and Bug from Once Upon a D6. We had a good time. I actually played the Heroine character, which is rare for me.
Please check out the video if you are curious how the game plays out. This is a good example of a light-hearted session inspired by MMORPGs. Warning: we get silly.
Posted by Unknown at 4:04 AM No comments: