Need a few mood-setting monsters for your game or your story? Feel free to use these. Each is a common monster tweaked into something a bit more ominous.

The animated bones of a cowardly soldier, usually wearing the armor or uniform of his former station. The Skeleton only attacks when it has the element of surprise. It moves slowly but quietly and it likes to attack from behind. When faced with well-prepared fighters, the Skeleton flees to the nearest woods and waits until the next night to attack again.

A waxy, off-white puddle that drags itself across the ground, digesting any human or animal matter it touches. The Gelatin shows a rudimentary intelligence and is a careful hunter. It lures prey by giving off the smell of cooked meat and by mimicking the sound of wounded baby animals. It most often sounds like a crying human child. 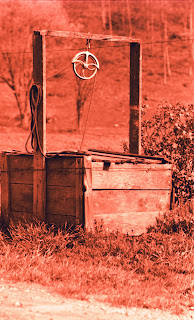 The Well of Sin

This well is cursed. There is some debate whether it is itself intelligent or not. However, rumor of its curse has traveled far; many fools make pilgrimages to drink from its depths. Anyone who drinks from the Well of Sin is said to receive the thing they desire most by the end of the day. However, this wish-come-true comes at a terrible price, for upon sunrise of the next day, the drinker becomes possessed by a demon for the next three days. These possessor demons vary, but they tend to wild murder sprees, theft, and near-constant libelous speech.

This Venom-like possessor entity covers the body of its host with a black rubbery film over the course of a few hours. Any body part covered by the black film is under control of the Wellington's alien intelligence. Its motives are unclear, but all who survive its possession describe the experience as a series of nightmares about owls, fences, and dried river beds. After a few hours of total coverage, the Wellington abandons its now unconscious host and returns to its dormant state, a pair of rain boots.

This beast appears in the form of a well-worn stuffed animal. It appears to feed off the suffering of families with young children. It abhors violence, however. The Velveteen's only method of attack is to cause despair in adult men and to directly or indirectly encourage them to abandon the family.

Photo by Starmanseries
Posted by Unknown at 5:48 PM 1 comment: