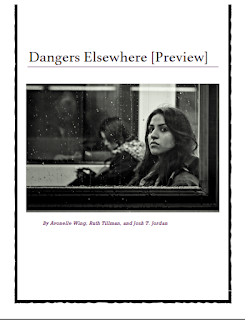 There are only a few more extras that I need to put in the mail for Dangers Untold backers. I expect to put all those things in the mail by the end of June. There's also a setting based on the biblical book of Esther that I need to finish writing. That should be done in June, too.

Meanwhile, I've collected all of the pre-generated settings and characters that Avonelle Wing and Ruth Tillman helped put together. This collection contains fourteen different settings, each of which has eight characters and some notes on how to run the setting. I've decided to call this collection, Dangers Elsewhere. Dangers Elsewhere isn't available for sale yet. Right now, only Kickstarter backers have their hands on the whole book. But I've decided to make a preview version available to the general public.
Here it is. This pdf contains the first eleven pages of Dangers Elsewhere, which includes the first two settings. The first, "I Dream in Song," is a Faerie music conservatory. The second, "Uplifted Whales in Alaska," is a futuristic, First Peoples/Native setting in which humans and sentient whales work together on the Alaskan coast. Feel free to share this preview with anyone you like.

Update: I originally described "I Dream in Song" as having Arabic and Welsh influences. I've removed that part of the description at the request of the author, who doesn't want to sound appropriative of other cultures. Though my initial idea for the setting was inspired by Arabic and Welsh stories, she doesn't feel she did the cultural homework to justify claiming those influences for the final product. I think she's right. I apologize for my mistake.
Posted by Unknown at 12:52 PM No comments: 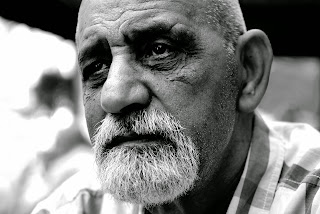 A modification of Lines and Veils

As I understand it, Ron Edwards originated the terms "Lines" and "Veils" in his book Sex & Sorcery. Lines and veils are limits on the topics of conversation and of narration in your game. Lines are hard limits, subjects that no player will mention at the table. Veils are occasional limits. Players ask for a veil whenever the narration or conversation is making them uncomfortable. All of the players then skip past or replace that part of the story with something that everyone is comfortable with.
Mo Holkar explains Lines and Veils clearly here. He goes one step further and suggests that players should have the opportunity to set lines and veils anonymously before they even sit down at the table. I think that Lines and Veils are a good tool for setting social boundaries at the table, and I like the idea of giving players the opportunity to add them anonymously. However, I I don't think there's anything sacrosanct about the terms themselves. There's any number of ways we could frame these social boundaries between players.
Borders and Bonds are a different method of setting up those boundaries. I offer them as a replacement for lines and veils at your table. Roughly speaking, Borders replace Lines, and Bonds replace Veils. They are different enough that this is not exactly true, but if you are used to Lines and Veils, it shouldn't be hard for you to make the switch for some of your games.
Before I explain Borders and Bonds, I ask that you remember, whatever system of social boundaries you use at your table, to make sure that other players are comfortable. No rule system replaces your duty as a fellow player to pay attention to how your friends seem to be feeling. 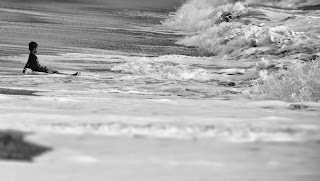 Borders are areas of conversation that your group decides never to bring up. In story terms, anything behind a border may exist somewhere in your story world, but it will never come up in the story you tell at the table. For example, if your Star Wars group puts a Border around child violence, you are free to imagine that child violence happens in the Star Wars universe, but all the players agree that description and discussion of child violence are outside the scope of our story. Events, subjects, tropes, or characters that your group has put a border around may happen somewhere in this universe, but they happen before, after, or completely away from the notice of our narration.
Like a Line, a Border excludes content that makes one or more players uncomfortable. Unlike a Line, a Border specifically restricts the speech and behavior of the player, not the content of the story per se. Players are free to imagine that the restricted material happens in the fictional universe of the story. Players are free to use shared universes or pre-existing fictional settings or game books that include the restricted material. They are only restricted from mentioning it at this table on this particular day with these players.
A Line may be a restriction on the story. A Border is a restriction on the speech of a player. 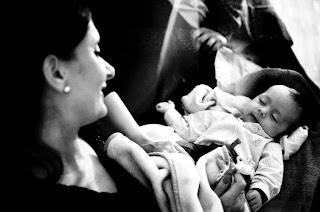 A Bond is your connection to a specific story element you do not want to be in danger. For example, if you have a bond with children, you like having children in the story, but you don't want child endangerment to be part of the story. If you have a bond with your character's magic sword, none of the other people at the table will threaten to steal, break, or nerf your magic sword. You can bond with ideas, too. A bond with romance means that characters may have romantic relationships, but those relationships will not be used as a source of conflict.
Bonds are points of trust that will not be broken during your story. These things are fragile and valuable to the players, so the conflict in the story shouldn't put them at stake or at risk.
You can bond to people, objects, or ideas. You can bond to something specific, like your father's magic hat, or something general, like all children.
Do not bond something simply because it is a cool aspect of your character or her relationships. As  Caitlynn Belle reminded me recently, great stories can happen when something important to your character is threatened. There are great Batman stories about Robin or Batgirl or the Batcave being threatened. There are great Batman stories about Bruce Wayne's identity being threatened. These things are not Bonded. On the other hand, I would argue that Alfred and Wayne Manor are usually Bonded. They are rarely threatened. They are part of Batman's safety net as a character.
If there's some element or relationship that you don't want threatened very often or that you want other characters to treat carefully, don't use a Bond. Just explain that this element is important to you, and you want them to, as Caitlynn says, "Tread carefully."

How to use Borders and Bonds

Give each player the opportunity to privately and anonymously write down Borders or Bonds on pieces of paper before the game. If possible, give them the chance to do so even before they sit down at the table. Players may need to ask you to break your anonymity if they do not understand what you have written down, but they will first make a good faith effort to figure it out.
(As Stephanie Bryant pointed out to me, if a player wants her Bond or Border to remain anonymous, it helps to write a couple of sentences to explain yourself. Saying "A Border around child violence" may cause your fellow players to ask clarifying questions. Violence caused by children? Violence affecting children? What about child PCs, who may become violent later? Spelling out "A Border around using children as collateral damage during fight scenes and against all kinds of child predators" is much more likely to guide the other players to restrain themselves the way you need them to. And writing this all down while you are still anonymous will help you to remain anonymous.)
Once you are at the table, as part of the conversation at the beginning of the game, give players the opportunity to mention that they want certain subjects to be Bordered off or "out of bounds." Also give them the opportunity to list relationships, ideas, or equipment that they feel a Bond toward. Listing Bonds works naturally as part of the character creation process. Setting up Borders works more smoothly as part of the game setup.
Players should feel free to add Borders or Bonds during the game itself, especially of the story takes an unexpected turn. If your group uses the X card, you may not need to spell out new Borders or Bonds in mid-session. If you don't use the X card, I suggest you practice calling for a new Border or Bond in the middle of the game, so that other players feel more comfortable doing so if the story goes in a direction that bothers them.

As cooperative storytellers, we are still discovering elegant and effective ways to care for each other during play. One critical way to care for other players at our tables is by restricting the content of our stories to avoid triggering past trauma or stepping on each others preferences. By all means, use Lines and Veils at your table, if that is what works for your group tonight. By all means, use an X card, if that is the most effective tool for your players' comfort. But consider adding Borders and Bonds to your tool belt. It has the advantage of including both an exclusionary rule, Bordering things out of the story, and an inclusionary rule, leave the Bonded things safely in the story.

Photos by Kerem Tapani Gültekin, released under a Creative Commons license.
Posted by Unknown at 3:00 PM No comments:

1. Grab a blank character sheet from an existing game. (Choose a character sheet that's pretty, from a game you like, or both.)
2. Grab a blank piece of paper.3. Without using any of the same stats, terms, mechanics, or background information as the original character sheet, make a new character sheet for a new, non-existent game with the same genre and themes as the existing game. 4. Tear up the first character sheet and throw it away.5. (Optional) In 500 words or less, describe how the game that uses this new character sheet would work. If the original game used dice, this new game uses different-sized dice or no dice at all.6. (Optional) Fill out your character sheet.If you want to participate in this challenge, go right ahead. You may want to use the hashtag #MechanicsChallenge. Feel free to email me at gingergoatpress@gmail.com if you want to show me what you came up with. Or reach out on Twitter or Google+.( #MechanicsChallenge  is inspired by +Andy Hauge's recent blog post about the need for mechanical innovation in rpgs, which you can read here: http://ludicrusgaming.blogspot.com/2015/04/game-stories-why-rpgs-need-game.html )﻿
Posted by Unknown at 12:39 PM No comments: