The Five Seals of InfoSec 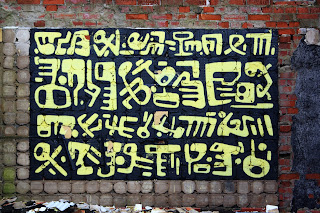 Here's a weird idea that I don't have time to turn into a game. Feel free to hack it, if you like.
Information Security, or InfoSec, is too important to be entrusted to normal people. That's why NATO and Warsaw Pact nations began to train mages to protect our nations' secrets.
There are now several overlapping schools of InfoSec datamancy throughout the world. The most successful are in the US, Germany, China, Russia, and India. Rumors persist of schools in Brazil and Israel, but if the other governments are aware of schools in those countries, they aren't talking.
How does InfoSec magic work? There are various incantations and techniques for protecting government secrets. However, the five most common techniques are called the Seals of InfoSec. Each seal represents an entire branch of datamancy. Not all schools teach all five seals. Some schools are much better at one or two of the seals than the rest. But all datamancers are at least aware of the five seals. There are spells and curses outside of the five seals, but these rogue spells are the exception rather than the rule.

Obscurity spells make information hard to see or hard to find. This is the most common seal. All schools teach some obscurity spells.
Tedium spells make the information time consuming to read or understand. Imagine an entire book with the words "Fat," Tuesday," and "Bingo" placed randomly between the actual words of the text. This would not make the actual words hard to find, but it would make them take more time to read.
Banality spells make the information so boring or mundane in appearance that it is difficult for an untrained person to focus on the information long enough to finish consuming it. (Banality spells were originally created in the US as an answer the Russian creation of Tedium spells. Now, most InfoSec schools teach both techniques, sometimes in combination.)
Encryption spells alter the information so that it looks like random noise unless you have the code to unlock it. The observer can see the information, but can't make heads or tails of it without the proper training. This is the only school of datamancy that actually involves computers as spell components. Other seals may allow you to cast spells on information INSIDE a computer, but encryption spells are often cast BY MEANS OF a computer.
Monitoring spells do not conceal the information, but they allow the caster to observe anyone who attempts to interact with the information. This defense is less like a barbed wire fence and more like a security camera. Specialists in monitoring spells often carry guns and stay hidden in a room near the information they are protecting.

How does datamancy work? What does this magic look like? I can't tell you. What's the difference between magic and technology? Unfortunately, that's a secret, too. The best I can say is that this sort of magic should either strike your players as cool or you shouldn't use it in your game. And if you want to see the guy who inspired me to write even this much on the subject, I recommend Sam Chupp's Encryptopedia.